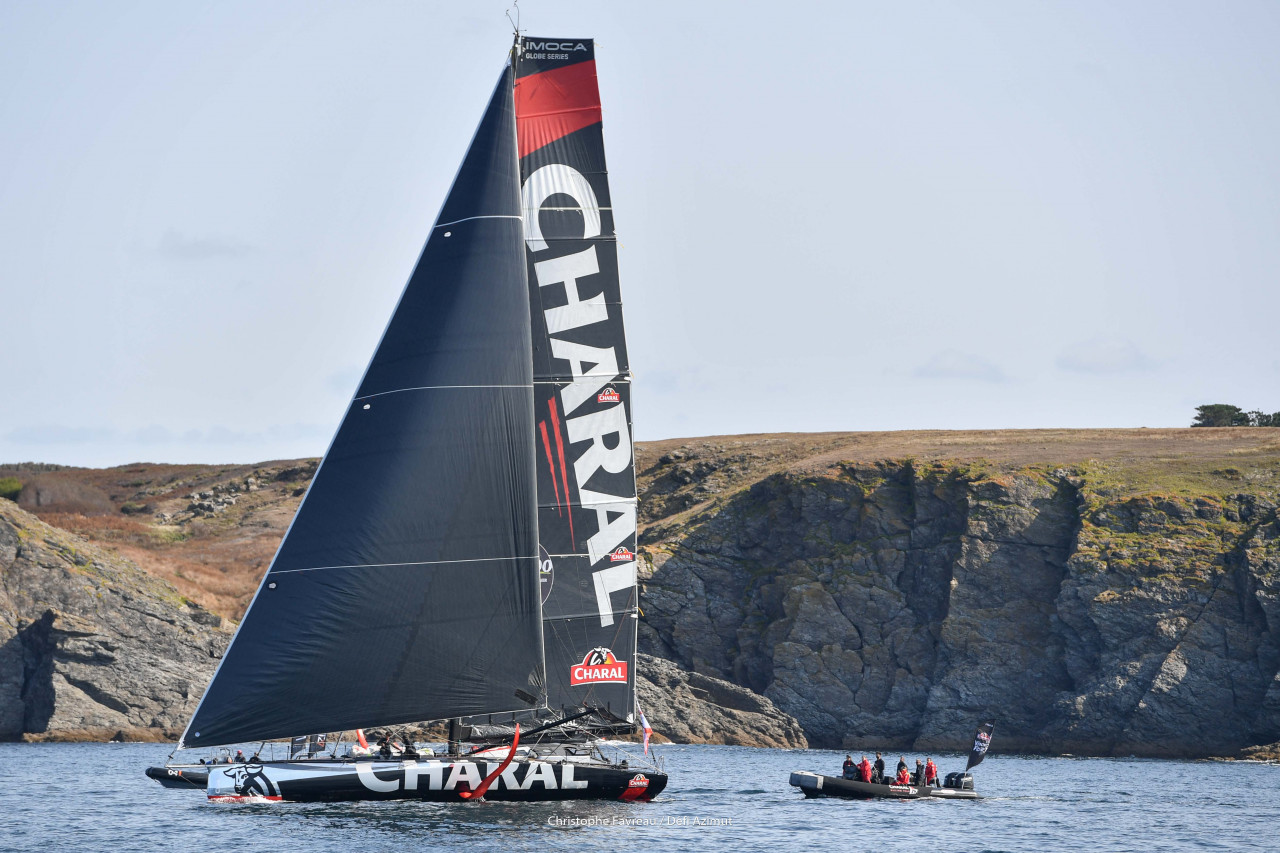 The utmost composure and an element of luck was required to take the win in this 48-hour Azimut.

The utmost composure and an element of luck was required to take the win in this 48-hour Azimut. Still anyone’s game right to the wire, race victory for the second consecutive year finally went to Jérémie Beyou (Charal), an opportunist hunter who managed to latch onto just enough air at Ile de Groix to carry him over the line. Samantha Davies bagged second place with Isabelle Joschke completing the podium.

There was precious little between the boats at the finish, largely as a result of the very light conditions, though this was also a demonstration of the high quality of the field competing in this event.

“We knew it was going to be full-on with the wind dropping away before the finish line. For Sam (Davies) and I, our position as the hunter wasn’t bad and all it took was a few solid tacks to bang the point home. I’ve missed other opportunities like these before and paid the price often enough in my life to know that all this is fragile territory, but it’s still nice to take the win!” explained Jérémie Beyou, modest in his triumph on the dock at Lorient La Base after this incredible final in the 48-hour Azimut, which took on the airs of a Solitaire du Figaro leg.

However, throughout the early morning, observers were gambling on Charlie Dalin (Apivia), who was still leading the way some 12 miles from the line after dominating play for 80% of the course. Then Kevin Escoffier (PRB) managed to slink past him to windward and still seemed to be controlling the situation some 4 miles from the goal. However, this was not their time...

The hunters and the hunted
Transformed into a millpond at 11:00 hours, the race zone was reminiscent of a wasteland. Clear-headed, Jérémie Beyou managed to slink along the coast, holding onto the breeze for longer before hooking onto a new zephyr with a better angle, Initiatives Coeur just a few boat lengths behind. As the breeze kicked back in, Isabelle Joschke (MACSF) was propelled onto the third step of the podium, with Clarisse Crémer (Banque Populaire X) hot on her heels in fourth place. With three women in the top four, the dock at Lorient La Base was buzzing at what is a truly unique result in the history of offshore racing.

Dazzling performances at every stage
Though Charal managed to secure the double in the Défi Azimut and remains undefeated this year, this 48-hour Azimut also saw honours go to the boats from the previous generations. Indeed, before the crawl for the finish shook up the established order, Clarisse Crémer, fifth, had demonstrated that Banque Populaire X remains a formidable machine upwind, more than capable of picking off the top players. Dating from the same period albeit kitted with foils, PRB also made a great comeback thanks to a series of tacks last night.

Among the new foilers, this 48-hour Azimut also demonstrated the potential of Armel Tripon’s L’Occitane en Provence. Clearly very at ease on a reach as expected, she is also very much on the pace upwind. The skipper from Nantes ultimately finished the race in twelfth place, though this in no way reflects the physiognomy of his race, which regularly saw him at the front of the pack.

All the fleet due into port by this evening
Whilst the first thirteen boats are now tied to the dock with each of their skippers pouring over the details of the race, Lorient La Base is now awaiting the final competitors who are set to cross the finish line by early evening. The perfect timing then as one and all will be able to enjoy a good night’s sleep before tomorrow’s circumnavigation of the Ile de Groix. The race will start at 13:00 hours local time for what will be the final act of this tenth Défi Azimut.