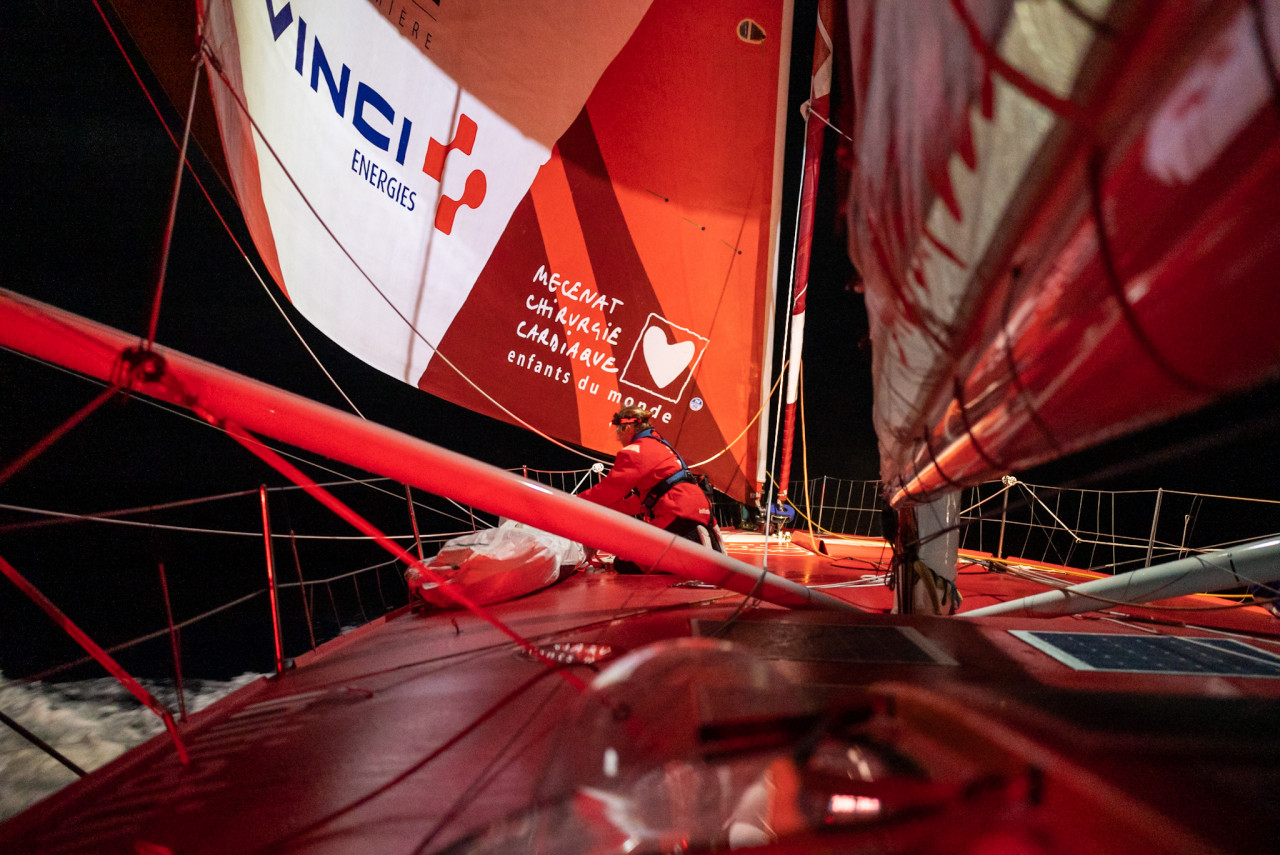 In a steady N’ly wind, the 28 IMOCAs have screamed across the Bay of Biscay, with the leaders sweeping down onto waypoint 1 some three hours ahead of the routing. The more shifty breeze along the Spanish coast is still not conducive to rest, but there is a clear hierarchy in both classes.

With the ‘Charlies’ heading each group, Dalin on APIVIA and Enright on 11th Hour Racing Team, they have a slight edge over their direct rivals as they attack the beat back up to Lorient, which is set to be more laborious as well as more tactical.

Maxime Sorel (V and B - Monbana - Mayenne): “I’ve had a great start to the race, even though I had a few autopilot issues over the course of the night. I’ve managed to come up with some kind of alternative. It helms a lot less well, but it does helm, which is the important thing. I’m getting to know the boat a bit better. I have a few competitors around me, which means I can work on speed and trimming. I’m very happy. At the start, I didn’t think I’d be so close to the leading group so I’m lapping up this position! The race is far from over though, so we’ll need to hang on in there…
We spent the whole night sailing under J0. A sail change was required at the bottom to switch to the large gennaker, but it would have involved flying it for such a short period that I don’t think anyone did it. After that, the wind was fluctuating quite a lot as we approached the mark (Azimut 1), with a fair few gybes to make. I’ve only gybed once. Others have gybed several times, but they must have wasted some time in the process. The gybe wasn’t that easy to position given the wind angles. Right now, we’re under J2 on a long reach with quite a bit of breeze. We’ve got around twenty knots, compared with the 14 on the forecast. It’s just dropped right away now so we’ve only got 10 knots. There are a few squalls, which means we have to be right on top of the trimming. I haven’t had much sleep so I’m a bit knackered after a pretty full-on start to the race. I could have rested better if I hadn’t broached due to my autopilot. In the early hours, at daybreak, there was between 16 and 19 knots, with peak speeds of 29 to 34 knots. The dragon was roaring, but I’m taking care of her!”

Charlie Enright (11th Hour Racing Team): “The first night was perfect with pleasant conditions and a sea state, which wasn’t too much of a problem for making fast headway. The whole team was on the case for the sail changes. We switched over to the large gennaker, which was the right combination for the end of the tack. We’re often sailing lower than the boats in solo configuration as we’re constantly trimming with someone on the sheets at all times. Right now, we’re in a period of transition with an increasingly shifty transition. We tacked after the mark to latch onto better pressure on the left-hand side of the racetrack and we’re trying to sail as best we can. There are always minor details to improve on, but on the whole we’re very happy with this start to the race.”

Tanguy Le Turquais (Lazare): “I’ve had a fantastic night. It was incredible! I’m just discovering the boat in race mode, and in solo format. It’s a bit different to the Figaro. Initially, I was watching everyone’s speeds to see who was gaining or losing 0.1 of a mile or 0.1 knots of boat speed. However, I soon grasped the fact that this is a different ball game and that I needed to change my points of reference and focus first and foremost on getting the boat making headway as best I can.
I really enjoyed sailing downwind last night. It’s been exhilarating. I made some great manoeuvres and I’ve got into my rhythm.
Right now, we’re making headway towards Azimut 2 in a slightly shifty breeze. I’m discovering the joys of adjustment in IMOCA. It’s pretty physical, but all’s well aboard.
Last night, I didn’t manoeuvre much. Instead, I set the boat up pretty well, so I’d have as few sail changes as possible. I think I was among those who hoisted their large gennaker earliest yesterday, in the late afternoon, and I slipped up a little along the way. It wasn’t necessarily my best strategy. Benjamin Ferré, my direct rival with straight daggerboards, was sailing a little higher, doubtless under Code 0, which is not a sail I have in my wardrobe. I was more conservative, but he’s not far ahead. The climb back up will be interesting and Damien (Seguin), the former owner of my boat, is just behind me. That means I’m not completely off the mark and it’s great to be in on the action, even though I’ve still got a lot to learn.
The boat’s not making headway now so I’m going to have to get to work! I haven’t slept much. I’ve just nodded off for a few minutes in the cockpit. I’ll get some sleep when we’re close-hauled… It’s time to get back to trimming the boat now!”