Perfect conditions for a dress rehearsal 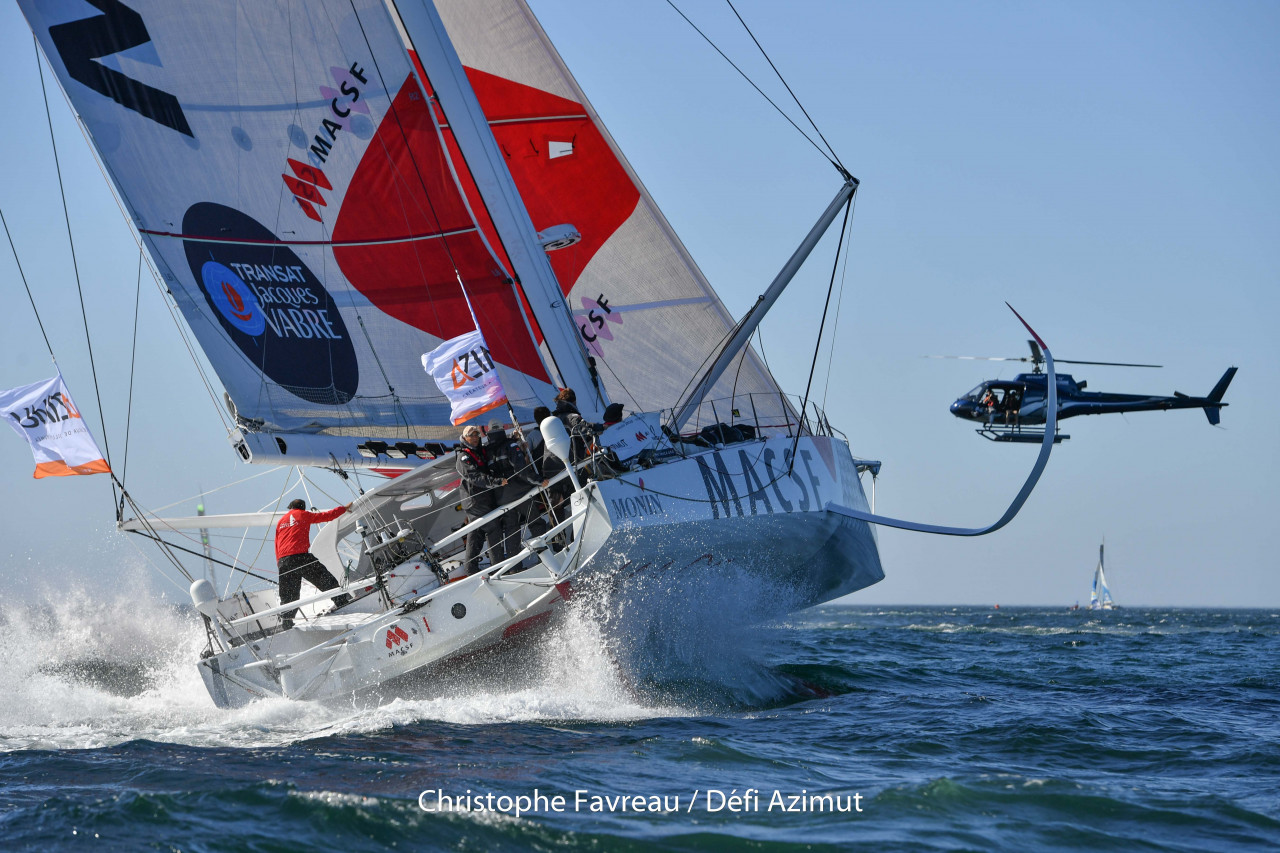 It’s full house… The pontoons of Lorient – La Base are a hive of activity this Tuesday 8 September, on the eve of the start of the Défi Azimut.

It’s full house… The pontoons of Lorient – La Base are a hive of activity this Tuesday 8 September, on the eve of the start of the Défi Azimut. “All eyes will be on this event. Weather conditions are not forecast to be rough so it’ll be more a case of gently getting into the swing of things!” admits Gildas Morvan, Race Director for this tenth Défi Azimut.

19 skippers have stepped up to the plate and are preparing to get down to business in a dream setting with a varied programme comprising speed runs and a 500-mile solo passage,  rounding off with a lap of the Ile de Groix…

An Indian summer. Glorious sunshine, a reasonable N’ly wind fuelled by a zone of high-pressure settled in nicely offshore of the Azores… Lorient-La base is witnessing a magical start to September. “The 10th edition should enjoy some wonderful light with some hotly-contested races and plenty of tactics and strategy for all the skippers.” Gildas Morvan (22 Solitaire du Figaros to his credit) has taken the reins this year as Race Director of the Défi Azimut, with full knowledge of the facts: “It’s everything I love. Drawing up a course with the skippers, listening to them, sorting out the on-the-water logistics and ensuring that the Défi Azimut is a fabulous prelude to the Vendée Globe.”

From tomorrow, Wednesday, at 15:30 hours local time on the dot, the 19 IMOCAs will take part in a series of speed runs between the harbour of Lorient and the Ile de Groix in Brittany. Spanning 1.5-miles, the contenders will be on the stopwatch with 2 to 4 attempts allowed. “Despite these summery conditions, the northerly wind will pick up over the course of the afternoon so the magic of speed should certainly be on display!” promises the Race Director of the Défi Azimut. The same will be true of the 48-hour sprint scheduled for this Thursday at 15:30 hours, with a favourable forecast on the cards coloured by a mixture of strategy and outright speed. “The idea is to get the skippers to go around an initial GPS position out to the West of the Bay of Biscay, then send them down to a second point offshore of Arcachon before they head back due North towards Ile de Groix. Essentially, it’s a 500-mile sprint on a direct course”, adds the sailor from Aber Wrac’h in the Finistère. This long triangular course should see the solo sailors returning safely to port over the course of the day on Saturday after two nights at sea.

The traditional Tour de Groix Azimut on Sunday will serve as a closing ceremony of sorts, it too likely to feature good weather conditions. A sporty and sociable meeting awaits then and what better way to show the guests and journalists present aboard the IMOCAs how demanding these machines are and the level of commitment required to sail them.


Armel Tripon, L’Occitane en Provence
“The Défi Azimut represents a great deal to me. After having to retire from the Vendée-Arctique-Les Sables d’Olonne it’s a great way to do battle with my fellow IMOCA sailors. The 48-hour race in solo configuration will be an important opportunity for me and my boat to size up the competition. The event is also essential for partner relations! This is what adds value to our sport and it’s a must. We have to demonstrate and explain what our sport is all about. I’m happy to have qualified for the Vendée Globe. I get a huge amount of pleasure from being on my boat. I feel quietly confident and I’m eager to get out sailing this weekend in Lorient!”

Sébastien Simon, Arkea-Paprec
“This will be the final clash before the Vendée Globe! I really like this fairly full-on format, as there will be quite a few of us in the start phases. It’s pure racing and that’s what I love! The 48-hour sprint will be crucial for me. I’m really looking forward to it as I need to spend some time on my boat. I’ll have foils, but not the ones I’ll be using in the Vendée Globe. That said, what counts is getting out sailing and having some fun. I’m so eager to go out sailing and purely and simply get some racing under my belt.”

Louis Burton, Bureau Vallée 2
“I haven’t missed a single Défi Azimut since it was created ten years ago. I love the varied and sociable format. It’s always interesting to face-off against the competition just a few weeks before the start of the Vendée Globe. I’m not putting any pressure on my shoulders, but the solo 48-hour sprint will be vital in my bid to rack up more experience, even though Bureau Vallée 2 is technically ready to set sail on the Vendée Globe.”

Samantha Davies, Initiatives-Cœur
“It’s the last event before the Vendée Globe but I’m not pressurising myself. The real test was the Vendée-Arctique-Les Sables d’Olonne, which went very well. I’ve already proven myself, I know that I feel good aboard my boat and that I can perform well. The Défi Azimut will primarily be about enabling me to continue getting to know my boat, validating it and drawing up a small jobs list if need be. I’m going to have some fun, but I know what I’m like, I’m competitive so I won’t be able to stop myself from doing the best I can.”