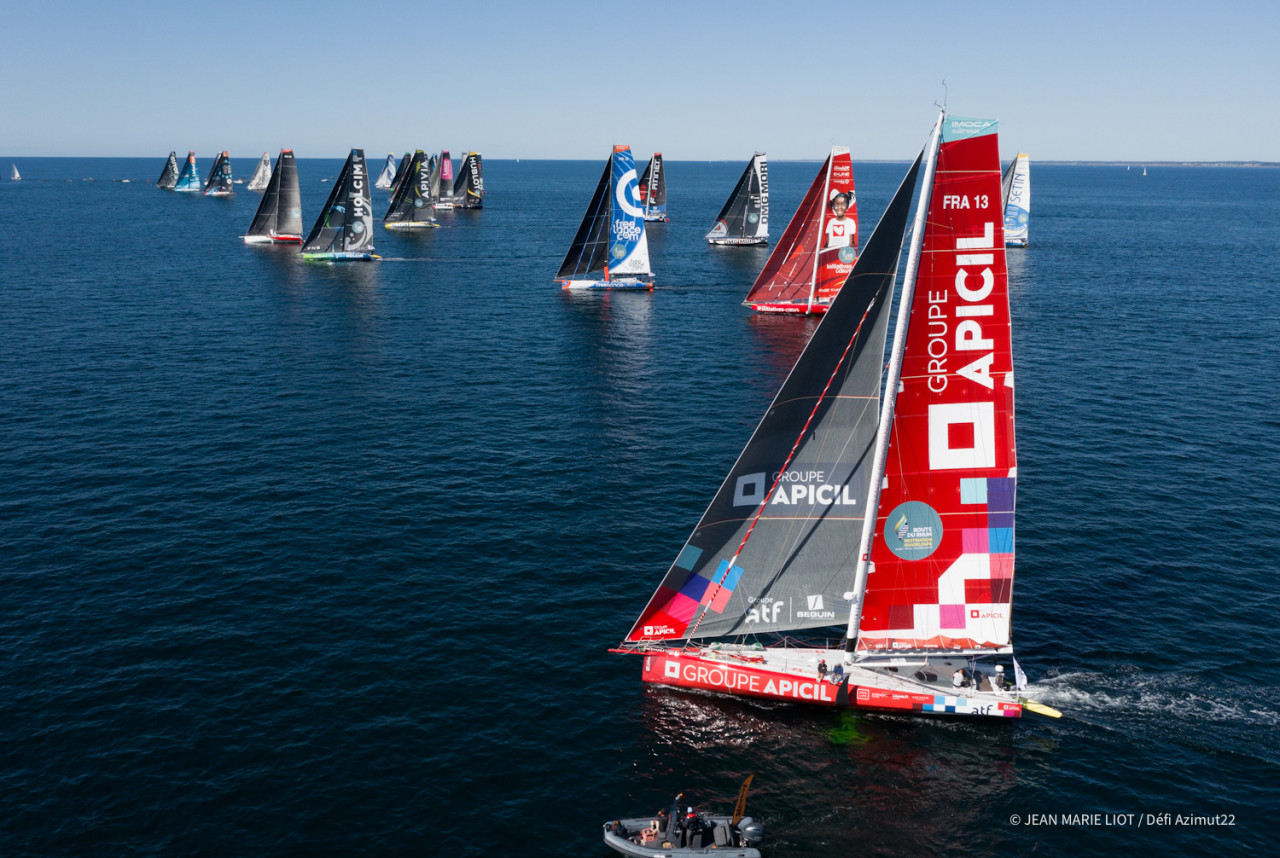 It was simply magical once again.

Top level sport, sociability and a varied race format, the ingredients of the cocktail that Jean-Marie Corteville created twelve years ago still works like a dream, despite the increased size of today’s event. Indeed, 28 IMOCAs joined in this week’s festivities at Lorient La Base, which is the most substantial line-up of its kind after that of the last Vendée Globe. Following the Tour de Groix, which was contested today in the last of the summer’s breeze, we review the past five days of brisk and exciting racing.

Quantity and quality: a record edition

IMOCA is thriving, that’s a fact, and the arrival of six new boats in this Défi Azimut shows just how fast this fleet is being fleshed out. In contrast to what we might have seen in times gone by, the new applicants are immediately on point, which is doubtless the result of the teams constantly raising their technical game and an increasingly good understanding of the issue of flight by the naval architects.

Solely Biotherm, launched just ten days before the Défi, had to throw in the towel at the end of the 500-mile course, after suffering some minor structural damage, which Paul Meilhat was keen to contain as quickly as possible so he can set sail again and complete his qualifier for the Route du Rhum.

A warm-up for the IMOCA circuit’s flagship event, the Défi Azimut was also an opportunity to gather together the entire and original line-up for The Ocean Race. Four of the five IMOCAs competing in January’s event were racing in crewed configuration in the Défi, with their own a dedicated ranking. As such, the solo and crewed rankings for the ‘48H Azimut’ made sure the event was completely transparent for observers, whilst enabling all the teams to size one another up. Furthermore, such a format only enhances the internationalisation of the event, making it conducive to discovering new sailors and attracting other media to the docks of Lorient La Base in Brittany.

A Défi opening its doors ever wider to its environment

The six conferences organised in the auditorium of the Cité de la Voile Eric Tabarly once again involved rich exchange of ideas with the ecosystem in Lorient, which proved to be a big hit with the public. Launched on Wednesday with a symposium on composite materials organised by AMAC, they also opened up the debate on data in offshore racing, the eco-design of boats, sleep when racing and support with innovation. The conference devoted to the evolution of IMOCA design saw Guillaume Verdier, Quentin Lucet (VPLP) and Samuel Manuard come together on the same platform, a rare treat for both the audience and the three naval architects, whose boats once again dominated the Défi Azimut podiums.

Finally, 200 children visited the event and the screening of the film Maiden on Thursday evening on the square in front of the Cité de la voile, creating a real link with the local inhabitants of Lorient, which the Défi Azimut will endeavour to strengthen even more over the coming years. “It was a challenge within the Défi to play host to all these children from the Lorient conurbation. We placed great emphasis on welcoming them to both the Base and the pontoons, inviting them onto the IMOCAS as well as on a trip out to sea. This is how you attract them to this milieu and this vocation. The Défi Azimut sows seeds and that’s synonymous with both our message and our action,” explained Candice Crépeau, Event Director at this evening’s prize-giving.

Jean-Marie Corteville, president of the digital solutions company Azimut and the Défi: “The size of this year’s line-up meant that every aspect of the organisation had to be scaled up. We had to draw on Azimut’s team spirit and we were also able to rely on our institutional partners, and Sellor in particular, to ensure that everything ran smoothly. The trusting relationship that has connected us to the skippers for so many years did the rest. I’ve loved rediscovering this sound, relaxed vibe that reigns on the pontoons of Lorient La Base during the Défi week and I remain very in awe of the teams’ professionalism.”

Antoine Mermod, president of the IMOCA Class
“The Défi was a major challenge for the 2022 season with the arrival of new foilers and a fleet, which represents 90% of the line-up for the Vendée Globe with some now well-established skipper/boat/sponsor teams. The Défi format is always great, which is something that’s worth remembering, and Azimut’s fantastic organisation makes it a unique event. We’ll doubtless have to give some more thought to the format of the runs, which we’ve developed this year. The boats eliminated from the group will need to be able to treat their guests to something extra. We also need to make the race zone more secure given the evolution in the boats’ performances, as they are increasingly being pushed to the limit.”