40 variations on a theme for the speed runs off Lorient 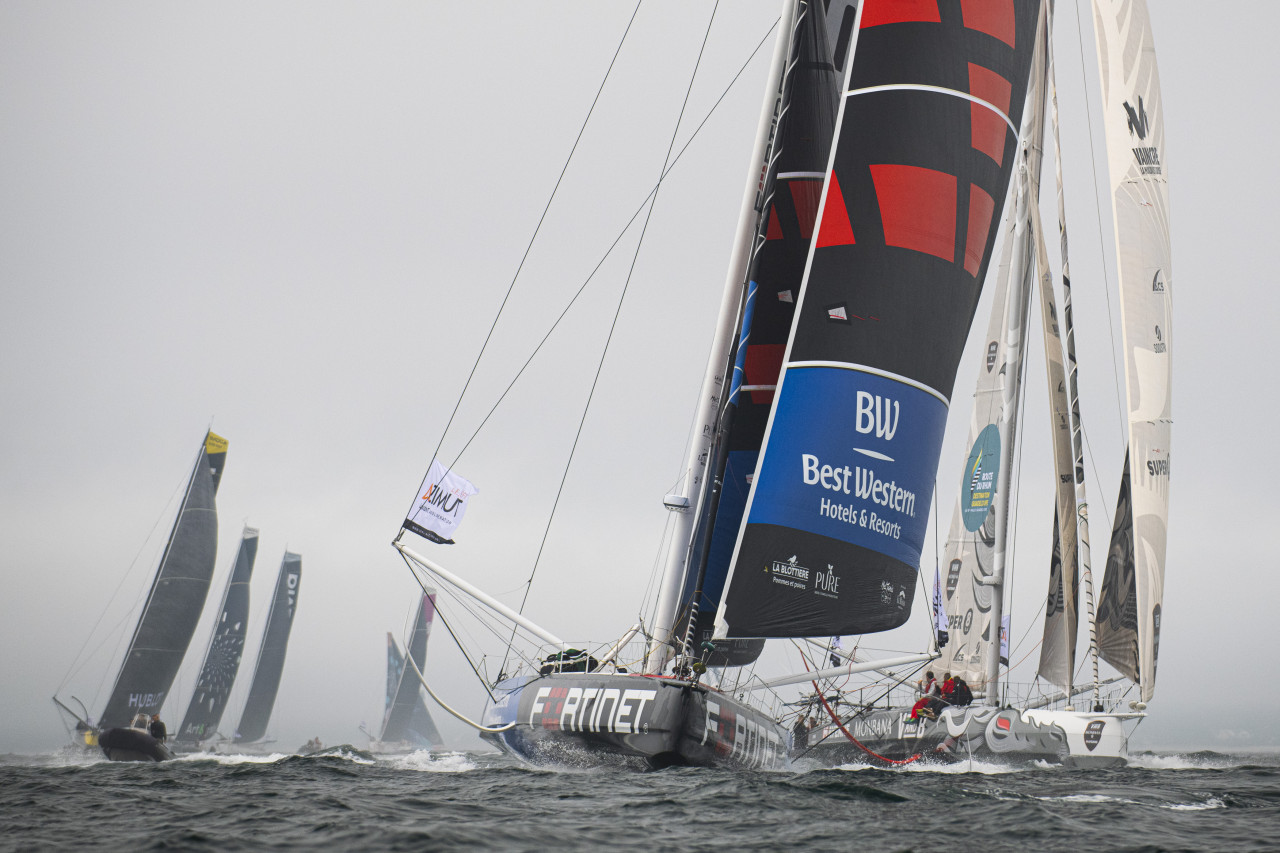 The 12th Défi Azimut is up and running.

The 12th Défi Azimut is up and running. Tradition has it that in the largest offshore racing event in the Lorient basin, which this year gathers together a first-class line-up of 28 IMOCA monohulls, it is with a session of ‘speed runs’ that festivities commence out on the water. The persistent mizzle and light W’ly breeze that set the tempo in the early afternoon in no way dampened the spirits of the skippers, crews and guests, all of them eager to set off down the course in Les Courreaux de Groix as if it were a stadium sprint.

The wind didn’t take long to pick up a notch today, giving the foilers that little extra lift to show off their spectacular potential. Following a short 0.76-nautical mile course, a series of speed runs were released down the course from 14:30 hours, with the fleet split into two groups of 14 boats, each of which were given two cracks of the whip initially. Two groups, one final round and forty timed sprints later, podium honours for today’s speed runs went to APIVIA (Charlie Dalin) in first place, followed by the new Charal (Jérémie Beyou) and the international crew on 11th Hour Racing Team (Charlie Enright).

A crescendo of times

As the curtain rose on this 12th edition, wind conditions (6 knots) were not very conducive to high speed and powerful acceleration. However, one by one, the 14 crews in the first group decided to try their luck, MACSF helmed by Isabelle Joschke opting to go first on what proved to be a series of relatively slow runs. Out on the racetrack, the initial attempts favoured the boats equipped with classic daggerboards, starting with Groupe SETIN, which topped the leaderboard for a considerable time. However, the wind filled in after the first few passages, serving up ideal conditions for the foilers to zoom along carrying all their sail area (mainsail, gennaker and J3).

The best time in this first series went to LinkedOut, which managed to latch onto a favourable gust, devouring the course in two minutes 22 seconds. Also of note was the fine performances by newbies Charal (2’34) and Holcim-PRB (2’44), despite rather different flying techniques. Indeed, the former enjoyed a stable ride incorporating long strides, whilst the second was able to rear up very high on a gallop. Prysmian Group (2’59) and Biotherm (03’02) complete the list of six foilers which managed to secure their ticket for the final. The 7th and first daggerboard boat Monnoyeur-Duo for a job narrowly missed out. However, they finished on a high with a better time than TeamWork skippered by Justine Mettraux, who was making her race debut at the helm of this IMOCA (ex-Charal) for today’s series of speed runs.

12 foilers in the final

Next up was the second group. The wind was still a little shifty between Ile de Groix and the coast but as the start line opened, it decided to ease for the remaining 14 protagonists on these runs. The focus at that point was on making sure the trimming was optimised so the boat was perfectly balanced for teasing out the best constant speed for a matter of minutes. Once again though, the W’ly wind picked up after the first attempt. This time it was V&B - Monbana - Mayenne which racked up the quickest time (2’16).

Again, the speediest six were all foilers, which have the ability to accelerate in the slightest puff of wind. Featuring appendages able to keep them delicately poised over the water in upwards of just twelve knots or so, the foilers filled the starting grid for the final. At 17:00 hours, all of them came together on the racetrack for one more run each. APIVIA was as impressive as ever racking up the best time on this 3rd and final run of the day (2’42) and, all too soon, it was time to return to Lorient La Base for the prize-giving on this first day of the competition. Tomorrow, the entire fleet is expected to take the start of the 48 Heures Azimut at 14:30 hours, in the Courreaux de Groix, a strait between Lorient and Groix Island.

Charlie Dalin (APIVIA):
“Even though the runs are always a random exercise, it’s always nice to win as the competitive instinct is strong and I have my team with me that works flat out all year too! I was also keeping an eye on the new boats. I’ve been waiting for this moment for a long time. Charal finished just seconds behind me, which means the boat performs well. They’re at the start of their development whilst Apivia is at the end of the road on that score so there’s a chance they’ll be faster than us one day. Holcim PRB also demonstrated great potential, but now I’m looking forward to the 48-hour sprint. We’re going to be sailing in a range of more varied conditions and in the open water, so we’ll see how the new boats with spatulated bows perform in particular.”

Ranking for the final of the speed runs