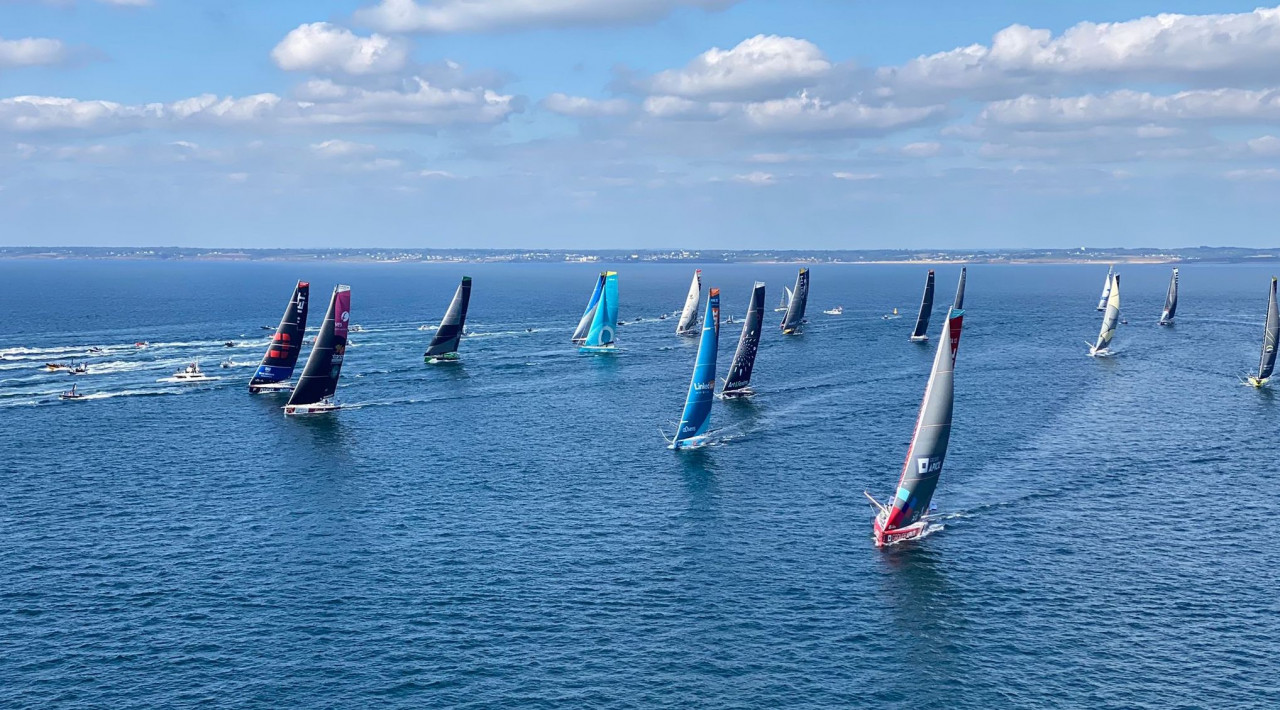 After a quiet start in the early afternoon, the fleet of 28 IMOCAs has picked up the pace considerably in the middle of the Bay of Biscay.

After a quiet start in the early afternoon, the fleet of 28 IMOCAs has picked up the pace considerably in the middle of the Bay of Biscay. At the front of the pack, the leaders are still neck and neck, with 11th Hour Racing heading the TOR group (The Ocean Race) and Apivia setting the pace for the solo sailors. However, with the wind clearly building and sail changes expected, tonight may see some of the boats extend away from their rivals.

“The wind is only going to get stronger. Those at the front of the pack in these ‘48 Heures’ will have the advantage!” warned the skippers this morning, dockside. With less than 8 knots of breeze on the start line, those IMOCAs latching onto fresh breeze to get around the tip of Ile de Groix had the edge, conjuring up some fantastic images around the Pen Men lighthouse.

Among the 24 solo sailors, Charlie Dalin on APIVIA took less than an hour to move up to the head of the fleet, whilst other boats like Holcim - PRB (Kevin Escoffier) and Hublot (Alan Roura) paid the price for a start to leeward of the line and already lamented a 4-mile deficit after an hour and a half of racing...

Among the four IMOCAs sailing in crewed format (The Ocean Race ranking), Biotherm, which was late over the line, quickly got back into the match and on the hunt behind 11th Hour Racing Team and Malizia-Seaexplorer, which were neck and neck.

With the breeze gradually filling in over the course of the afternoon, there was a great deal of jockeying for position among the boats with daggerboards and the foilers, which were beginning to get up on the plane at over 15 knots. Getting off to a very good start, Louis Duc (Fives Lantana Environnement) and Benjamin Ferré (Monnoyeur - Duo for a job) quickly traded places with Charlie Dalin, who was leading the attack, Jérémie Beyou (Charal) also responding well in this first race on his new Manuard design. The duo was able to steal a march on a small group led by Thomas Ruyant (LinkedOut), Romain Attanasio (Fortinet Best Western) and Maxime Sorel (VandB Monbana Mayenne). With conditions still shifty, everyone was being careful with their trajectories, including Justine Mettraux (TeamWork), who’s right back in the action.

With the breeze gradually lifting, the IMOCAs were beginning to luff up above the direct course this evening, before a scheduled gybe in the middle of the night. As the skippers prepare to grant themselves a first little nap, each of them will be wondering about whether to switch headsail to make good headway along the route and line themselves up for waypoint 1, some 220 miles from Lorient. “Fluffing a manoeuvre is a major in solo sailing,” explained our consultant Christopher Pratt during the live coverage of the start. “It can sometimes pay off to keep up as much of your original sail area from the start as you can, even if it means not performing quite so well. It’ll all depend on the strength of the wind and the timing.”

On the IMOCAs that make up the TOR group though, there’s no questions to be asked and all the nocturnal manoeuvring will be a valuable lesson in crew cohesion. That’s exactly what these IMOCA teams were after as they prepare to set sail on The Ocean Race in mid-January.

See you tomorrow morning offshore of the Principality of Asturias, where the virtual waypoint 1 will reveal the initial hierarchy after 200 miles of racing.