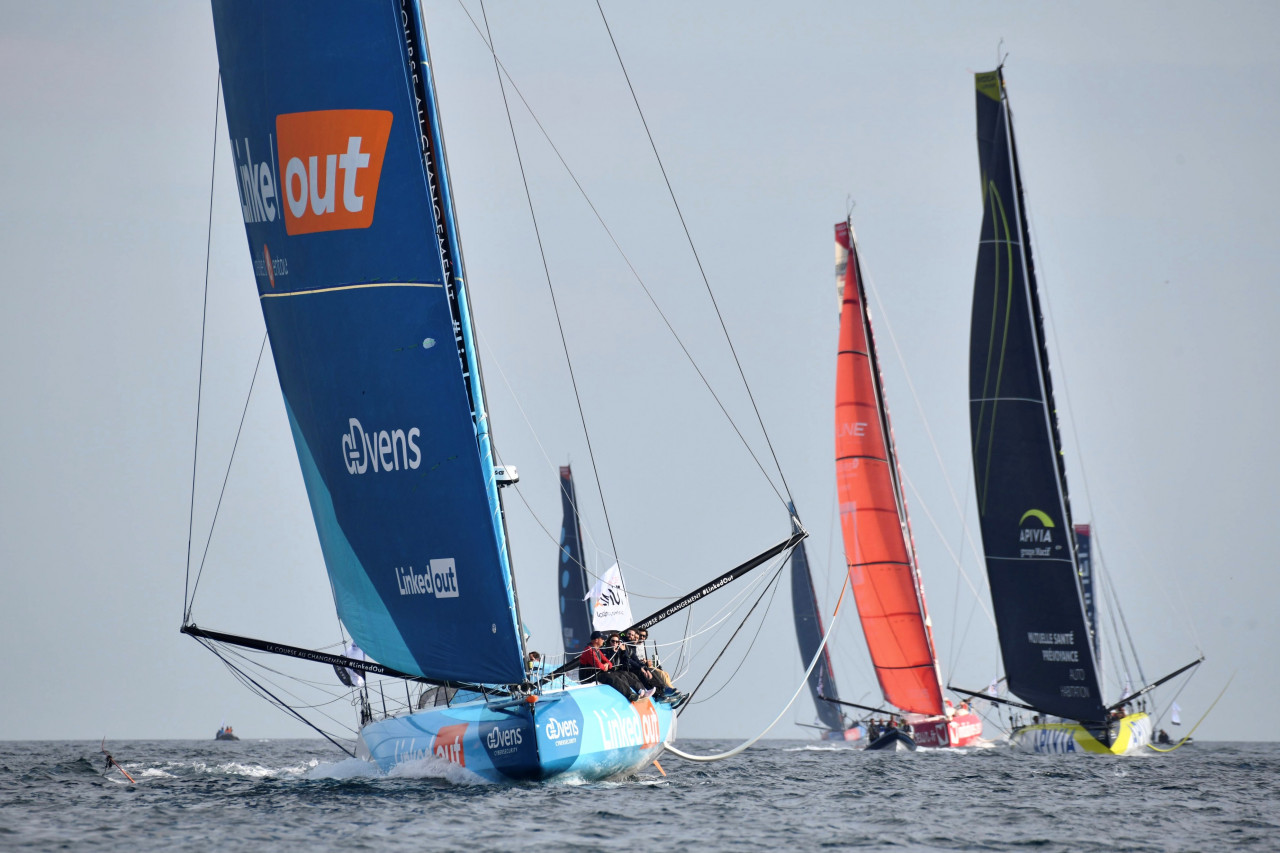 The pontoons at La Base marina in Lorient are buzzing this week as the IMOCA Class prepares for its annual showcase regatta – the Défi Azimut-Lorient Agglomération.

This year’s regatta, which features speed runs outside the harbour on Wednesday and then an offshore race beginning on Thursday, comes at the start of the new Vendée Globe cycle, but also as the class prepares for its inaugural participation in The Ocean Race that sets sail in January.

As a result, the world’s most exciting offshore ocean racing fleet is full of brand new boats built either for solo and double-handed racing in this autumn’s Route du Rhum-Destination Guadeloupe and then the Vendée Globe, or for fully-crewed configuration in The Ocean Race.

Among the IMOCAs gracing the pontoons this week are the new futuristic-looking Charal, with its unique and innovative rudder configuration, skippered by Jérémie Beyou, and the stunning-looking V And B-Monbana-Mayenne skippered by Maxime Sorel, which will both do the Rhum.

Then there are a group of new boats that will do both that transatlantic classic and The Ocean Race, among them the blue and white Biotherm skippered by Paul Meilhat, Malizia-SeaExplorer skippered by Boris Herrmann of Germany, which has an unusual cabin design to protect its crew, and the new Holcim PRB skippered by Volvo Ocean Race winner Kevin Escoffier.

Antoine Mermod, president of the IMOCA Class says this is the beginning of the long build-up to the next Vendée Globe. “It’s a fantastic time for the Class,” he said. “We are working on a four-year cycle and now it’s the real start of the story for the next Vendée Globe in 2024, with half of the new boats launched plus most of the other new projects now underway.”

But Mermod says the upcoming Ocean Race is giving this year’s Défi Azimut a unique feel. “While the focus is on the Vendée Globe, in addition we are also gathering here this week with the start of The Ocean Race looming too and this is the first time that we have had the solo and fully-crewed fleet all together in the same place at the same event. So it is a big moment in the history of the Class.”

An interesting consequence is that the long offshore race, a key feature of the Défi Azimut, will this year feature a 500-nautical mile solo race for the majority of the boats, but also a fully-crewed one of 600 miles for four of the boats entered in The Ocean Race.

Among the sailors preparing for this week’s competition is Frenchman Nico Lunven who has recently joined Herrmann’s crew as co-skipper and navigator for The Ocean Race. “It is going to be very, very interesting first, to see how we compare with the other boats this week,” he said, “even if, for us, everything is a bit new. So we can imagine it will be hard to fight against the best boats but we will see.

“The other reason,” he continued, “is that four boats here are competing with crew in the next Ocean Race so that is interesting and we are very keen to compete against each other.”

Paul Meilhat, meanwhile, is racing against the clock to get his brand new Biotherm ready for Wednesday’s speed runs. The Frenchman has only managed two test sails on his new boat, but was encouraged by what he saw, with the Guillaume Verdier-designed IMOCA hitting 30 knots of boatspeed in 15-18 knots of breeze off Lorient on Tuesday morning.

Meilhat has hardly had time to check out all the other boats on the pontoons at La Base as he works with his crew at the start of a busy nine months that will see him compete in the Rhum and then The Ocean Race. “You know, I am pretty focused about myself and my boat and don’t really have time to look around,” he said, “but I think Charal (Beyou) is the most impressive boat here because it is totally new and with lots of new technology on it.”

Meilhat says quite a lot of the boats are still being prepared after launch. “The boats are not ready so I’m not sure for the Rhum we will be ready,” he said. “But we will know if we have made good choices for The Ocean Race.”

On Charal there were up to 12 team members making adjustments and tweaks to the boat’s set up under the guidance of the team’s new performance manager, one Franck Cammas. The former Jules Verne Trophy holder, Volvo Ocean Race winner and multiple winner of other trans-ocean races, said the team was working hard to tease extra performance from Beyou’s new Sam Manuard-designed IMOCA.

“You have to refine the boat to perform,” he told the Class. “We need to be always open-minded and if you can change quickly, you can improve quickly.” He said he was pushing the team hard. “Sometimes I am fighting with them to not shy away from it,” he said. “We have a very good boat but we have to use it well.”